Unsupported Chimney Stack? What You Need to Know

If you’re considering buying an older home, it’s very likely that the property was built with one or more fireplaces and chimneys. It’s also possible that the house has undergone various renovations or structural changes over the decades. One of these alterations could be the removal of a chimney stack in a ground or upper floor room to achieve more useable floor space.

If this has happened in a property you’re about to buy, your building survey should look closely at the structural support put in place when the chimney breast was taken away, because removing it from one room can leave an unsupported chimney breast above it, which is obviously very dangerous.

When Victorian properties were constructed, during the 19th and early part of the 20th centuries, there was no form of gas central heating as we know it today.  Space heating throughout the property was provided by a network of fireplaces, not just at ground floor level, but also to the upper floors of a property, with fireplaces in subsidiary rooms, particularly bedrooms, actively used in the winter.

Since the advent of gas central heating, fireplaces have, for the most part, become redundant, although many properties retain the use of at least one ground floor fireplace, adapted for gas use.  In such cases, a flexible metal flue liner should be provided, in order that the gases of combustion do not eat away at the lining to the flue.

In my own experience as a chartered building surveyor, I cannot recall a single instance where any fireplace at first floor level or above is still active and therefore, the chimney breast to such fireplaces is, essentially, dead space.  In an effort to increase the floor area on upper floors, subsequent owners of these older properties have sometimes removed chimney breasts in various rooms.

The danger of an unsupported chimney breast

If such removal works do take place, the chimney breast at ground floor level, although no longer useable, can be left in position.  However, within the roof space, the chimney stack remains, unsupported now by anything below it on the floor beneath.

The danger of an unsupported chimney stack is that several tons of masonry could collapse, potentially injuring or even resulting in the death of occupants below.

In this situation it’s advisable to implement one of two options. Either the chimney breast in the roof space must be removed, or it must be provided with additional support that the chimney breast on the lower floor would originally have given.

Can you remove a chimney breast with a shared party wall?

In a terraced or semi-detached house, the chimney stack could be sited on a shared party wall. In order to remove the chimney breast within the roof space, there would have to be extensive negotiation with the owner of the adjacent property, which may well share the flue. Such discussions often prove to be onerous and non-productive, to the point where they are not pursued.

Instead, the decision is usually made to support the chimney breast within the roof space, rather than remove it.

If removing an unsupported chimney stack isn’t an option, providing the right replacement support is essential. Such replacement work is usually carried out by the building-in of what is known as a gallows bracket, which is essentially two metal angle supports fixed to the brickwork, often with a concrete lintel spanning between them. The lintel holds the roof space chimney breast in position.  A photograph of such a traditional support arrangement, which provides adequate structural stability, is seen beneath. 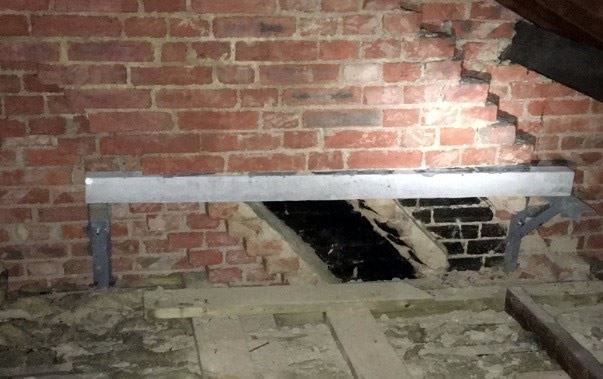 Building surveys can identify a chimney breast upstairs but not downstairs

In my experience of conducting building surveys of older properties, I have seen instances when a chimney breast at first floor level has been removed and no support works have been carried out within the roof space, essentially leaving the roof space chimney breast hanging. In some cases, some limited structural support has been given, but nowhere near substantial enough to provide adequate long term stability.

On a recent survey, we came across such an inadequate arrangement.  Whilst the chimney breasts were intact within the main body of the building, both at ground and first floor level, to both reception rooms and the corresponding bedrooms above, there was a chimney stack, barely visible, to the rear of the property that could only just be seen  from ground level.  Our inspection revealed that there was no corresponding chimney breast within the first floor bathroom beneath, it having been removed at some point in the past.

Our inspection of the roof space above revealed a small piece of timber spanning the joists, providing completely inadequate support. This structural arrangement was not only inadequate but dangerous, with the structural integrity of the chimney stack completely compromised.

A photograph of the lack of support can be seen beneath. 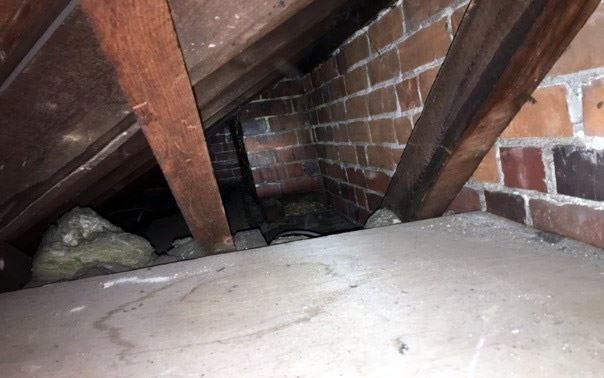 We estimated the cost of providing a satisfactory level of support to be around £10,000, as the bottom of the stack was now inaccessible and needed most of the ceiling and roof structure adjacent to be removed, in order for access to be available, and then making good on completion.  Our clients attempted to negotiate the necessary £10,000 off the purchase price, but the vendors were unreceptive and, as a result, they pulled out.

On several occasions, such chimney stacks have collapsed, resulting in loss of life to sleeping occupants beneath.

Checking proper support to the chimney stacks within the property should form part of a building survey carried out to a professional standard.

Get a quote for a survey

It’s always best to arrange a full building survey of older properties to identify structural problems like the ones described here. Chimney stacks are just one of a wide range of matters a chartered building surveyor is trained to inspect.

Contact us on 07711 491000 or email info@jamesrossandcoltd.co.uk for a no obligation quote.

Our survey alerted the prospective purchaser of this lower ground floor flat in London's NW6 area to penetrating dampness and rising dampness which might cost around £15,000 to put right.

Using a Building Survey Report to negotiate with a vendor

You’ve received your Building Survey Report and some expensive defects have come to light. What are your options? Can you re-negotiate the asking price with the vendor?