A Building Survey in Henley-on-Thames - Finding The Unexpected

We recently carried out a full building survey on a modern property in Henley-on-Thames on a large, detached, modern structure. 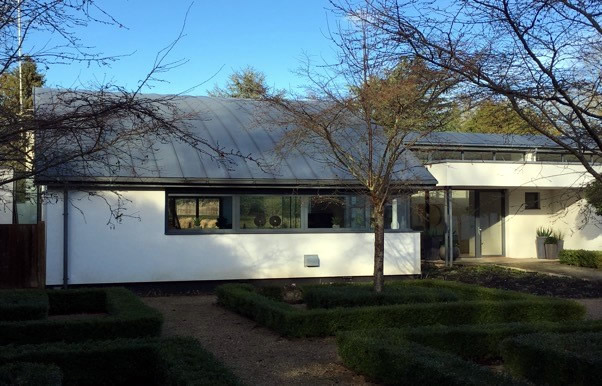 The condition of exterior render 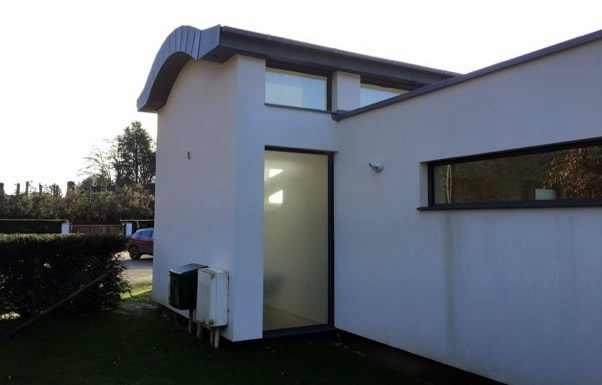 General view of the external render, in satisfactory condition, although with patch of damp staining due to run-off from the parapet capping around the main roof.

The method of re-rendering was the application of false boarding with a textured finish, which, when tapped, gave a hollow sound.  We were able to report that the work had been carried out to a good standard with no defects noted, apart from some staining to the finish of the render caused by some run-off from the parapet cappings around the perimeter of the main roof.  However, this was purely a decorative issue.  We were therefore able to give reassurance on this point.

The second item our client was aware of was that there had been recent works carried out in respect of a basement/cellar area, which had been dug out of the ground to install an internal swimming pool.  As this area was below ground level, it had been waterproofed, originally, when the property was built; however, the system of waterproofing had failed and the sum of £150,000 had been spent under an insurance claim and only recently completed. 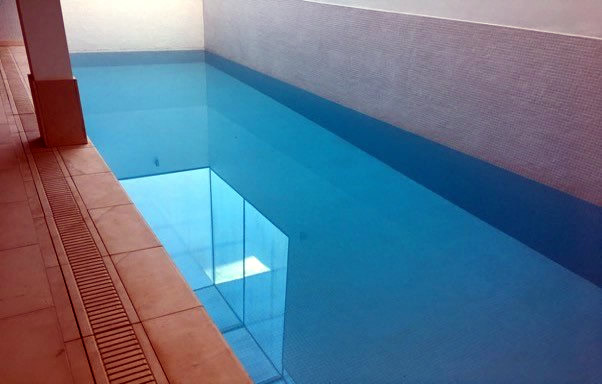 General view of the swimming pool in the basement area, which has been fully waterproofed with new tanking, and now in satisfactory condition.

We were able to examine the basement area and give a degree of reassurance that the work had been carried out to a satisfactory standard.

However, we did stress the fact that two elements were vital in respect of the works carried out.

Reassurance was obtained on both these issues.

However, during the course of our inspection, two issues came to light that the purchaser had no knowledge of and had not anticipated as being items of concern.

The first was the presence and condition of two large, glazed structures that had been built as part of the original construction to give increased levels of natural daylight.  The panels were huge and had been slotted together, presumably using the services of a crane, due to their weight.  They were not provided with any traditional rainwater goods, and water landing on the upper surface of the panels simply washed down the sides, with the whole of its ability to remain watertight resting on the adequacy of the neoprene seals at the points where the glazed panels met. 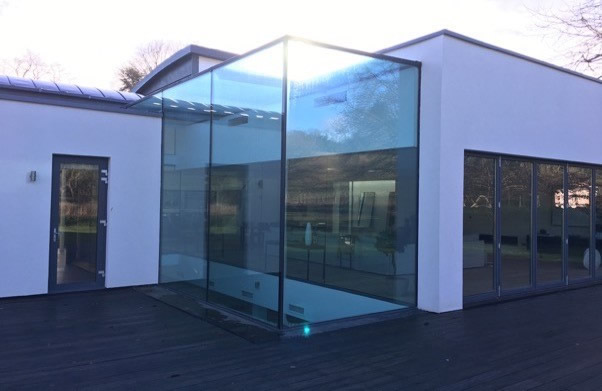 Large glazed structure above the swimming pool, now vulnerable to damp penetration where the glazed panels meet and are sealed with neoprene joints. 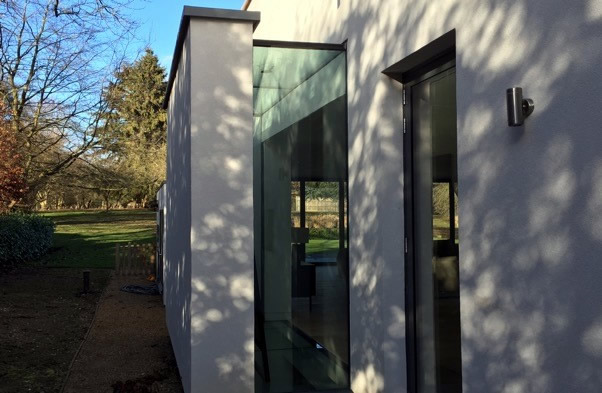 Smaller glazed structure to the left side of the property.

Unfortunately, in several places the seals appeared to be leaking or had perished and therefore we had to advise our client that substantial works would be necessary to renew the seals. This might even involve the bringing back to site of a crane to dismantle the panels, due to their weight, and their subsequent reassembly.  The cost of this work, with the difficulty in finding an appropriate specialist, was likely to be significant. 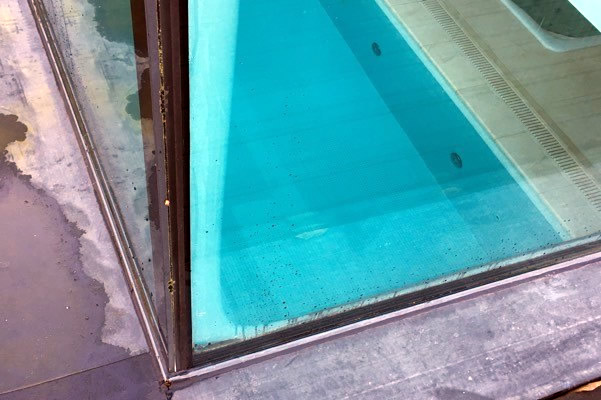 Evidence of the neoprene seals deteriorating externally to the large, glazed structure.

The second item of concern was the presence of substantial levels of condensation, in the form of deposited water vapour, to the inside of the glazing to a number of the windows and external doors, and also to the internal face of the walls in isolated areas, with associated mould growth. 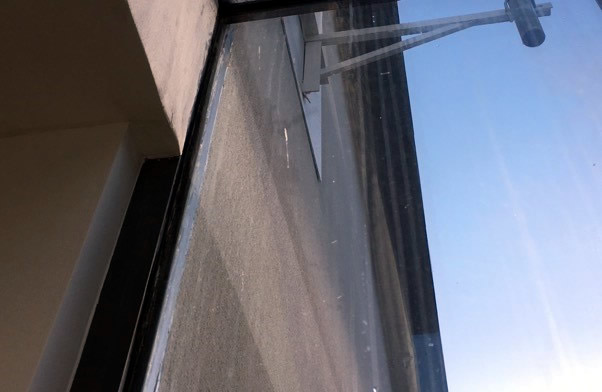 Damp penetration in the form of streaking noted internally to the front right corner of the same glazed structure. 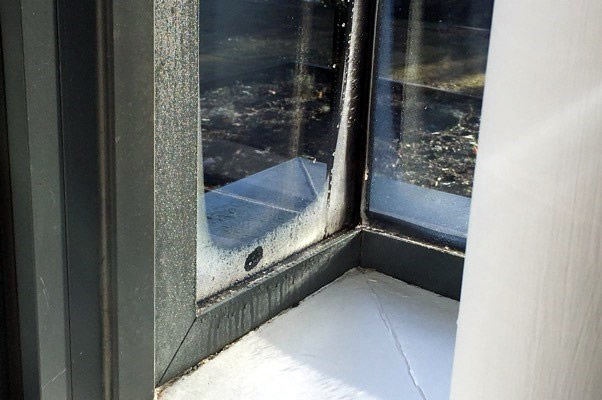 Example of severe condensation to the window to the front right corner of the kitchen.

Condensation issues such as this, on a property this modern, are extremely unusual and generally relate to inadequate levels of heating, ventilation and insulation.  With there being no clear or obvious remedy for the condensation, as all three of these qualities was at an above-average level, this was likely to be an issue of concern in respect of carrying out the relevant remedial works to ensure that no further amounts of water were deposited to the internal structure.

The lesson here is that it is not always those issues that are readily apparent that may be the primary cause of concern. Wholly unexpected matters can sometimes come to light during the carrying out of a full building survey that have profound implications for the future use and enjoyment of a property. If these are discovered once a purchase has been completed, where a survey has not been commissioned, when it does not appear to be necessary, the consequences and the potential level of money that might need to be spent by way of future rectification, can sometimes be enormous.

Even modern properties can have issues that need to be addressed. Ask for a full building survey.

Contact us on 07711 491000 or email info@jamesrossandcoltd.co.uk for a no obligation building survey quote.

Unsupported Chimney Stack? What You Need to Know

Surveys sometimes reveal chimney breasts that have been removed on lower floors, leaving unsupported chimney stacks above. Read about the dangers of insufficient structural support for chimney breasts.

Using a Building Survey Report to negotiate with a vendor

You’ve received your Building Survey Report and some expensive defects have come to light. What are your options? Can you re-negotiate the asking price with the vendor?